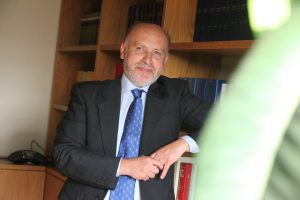 Born in Milan in 1956, Stefano graduated in law from Università Cattolica del Sacro Cuore in 1980.

He carried out his legal traineeship in a Milanese law firm specialized in employment law. He became co-partner of this firm in 1989 and later continued as a sole proprietor, from 1994.

He qualified as a lawyer in 1982 and was admitted to appear before the higher courts in 1996.

In 2006 he joined Studio Daverio & Florio as Partner, adding the resources of his firm to those of the partnership.

Stefano has always carried out his professional activity – be it in court, arbitration or consultancy – throughout Italy and mainly in the areas of employment law, trade union law, social insurance and agency contracts, acting for companies and corporate groups of the most diverse industries and sizes, as well as for executives.

He has been a member of AGI – Avvocati Giuslavoristi Italiani, the Italian employment lawyers’ association, since it was set up in 2002.

He has spoken on employment law issues on television and radio programmes, his articles have been published in daily newspapers and specialist reviews and he has lectured at training events and Master’s courses in employment law at Università Cattolica, for the Chartered Accountants and Expert Bookkeepers Association and other entities.

Appointed by Milan Bar Association, he was a member of the Certification Commission at the Provincial Labour Office of Milan.

He is currently a member of the Steering Committee of the Domenico Napoletano National Centre for Employment Law Studies – Milan.